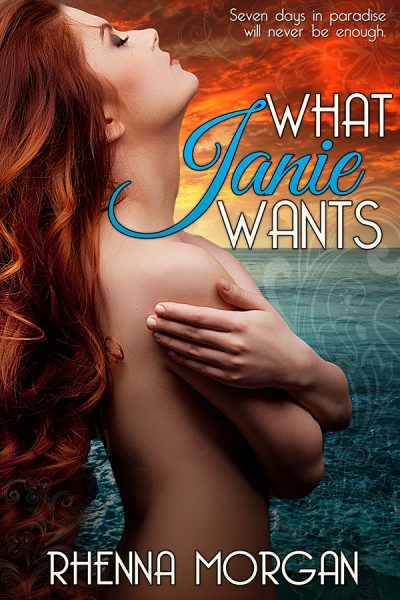 Signing divorce papers the same week she turned forty wasn’t part of Janie McAlister’s happily ever after. With an empty nest and no cheating spouse to look after, her future’s in desperate need of a makeover.

Signing divorce papers the same week she turned forty wasn’t part of Janie McAlister’s happily ever after. With an empty nest and no cheating spouse to look after, her future’s in desperate need of a makeover. Her quirky sister’s tropical getaway gift seemed a perfect place to start. But instead of thatched roof huts and designer pools, she’s landed at the one seventies throwback in the Riviera Maya—and caught the attention of a bold young man who won’t take no for an answer.

Zade Painel’s a man on a mission—grab some much needed R&R at Gypsy Cove, and figure out how to reclaim his boudoir photography business. He never thought the answer would come in the form of a curvy, forty-year-old redhead and an accidental knee to the ‘nads, but Janie’s a force of nature with a penchant for fixing things. She’s also sexy as hell, despite her hangup with him being a younger man.

He’ll show her age is just a number, starting with a very grown up invitation—stick to what society says is right, or give time and attention to her own desires and claim what Janie wants.

Praise for WHAT JANIE WANTS:

“I loved this book. It was a pretty predictable romance plot, super cute, but the meaning behind this book. Holy shit. It was phenomenal. It was about loving yourself, and accepting yourself, your body, just the way it is. Which is beautiful. I just wanted to sing and dance with how well the author got this point across.” —Bookaholic Raves

“What Janie Wants is a short story that packs a whole hell of a lot of story into it. I think you’ll really enjoy it. Who doesn’t want to read a fun, sexy good time story?” —Romancing the Readers

“Ok, so you read the blurb and you’re like…not really interested in reading a “cougar” book. I know you’re thinking it because I totally thought the same thing. But here’s the thing…the author did a great job with the story that I didn’t care. This is a sweet story about a woman who needed a little guidance to rediscover herself, surprisingly from the last person she’d ever expected. Learn something from Janie and don’t judge a book by it’s age.” —Stephanie’s Book Reports

“A fun and flirty read with a drool-worthy hero that’s still invading my dreams and I recommend it as a decadent diversion to the stresses of the day.” —The Scarf Princess

“In a mere 164 pages, Morgan shared enough background, and developed the characters and their relationship. The descriptions put the readers right in the middle of each scene. I practically felt the breeze! Slip on something comfortable, mix-up a tropical drink, open a window, and join Janie and Zade on their adventure.” —Happy Ever After Book Reviews

It sounded like a place Emmy would pick. Tiny, quirky, and way, way off the beaten path. The odds of finding any cute little thatched roof huts or designer pools overlooking the ocean like she’d seen online were slim, but they probably had a whole storeroom full of little umbrellas for the drinks.

Behind her, the taxi driver sped out of the cobblestone circular drive, dousing Janie in a puff of lung-choking exhaust. Apropos of her life, lately. One fast getaway and a big old mess left behind.

She waved the smoke off and lumbered toward the unattended bell stand, her purse, overnight tote, and rolling suitcase vying for the chance to whop her off balance. The halter-top linen jumper she’d bought as a part of her suddenly single vacation wardrobe hugged her full figure a little tighter than it had the mannequin, but at least it was cool. August temps in Mexico could give hell a run for its money.

Surely they’d have a spa. Or at least a massage therapist. Wasn’t that a Caribbean requirement? Though, with the looks of this place, she’d probably get a masseur with long hair named Stoney instead of a muscled up man in a polo and golf shorts.

“Oh, there you are.” A wiry middle-aged man with dull brown, thinning hair that stuck out in all directions and a much thicker mustache, loped down the short steps, flip-flops slapping with each stride. The poor guy’s tropical shirt was as wrinkled as Janie felt. “Dahlia said you’d be here. Janie McAlister, right?”

He oomphed and hefted her overstuffed suitcase up the stairs in an awkward arch that would have thrown her back out for days. “Dahlia’s my wife. We own the place. She kicked me out of beach bingo to check you in. Also said to give you the room closest to the point ’cause you had shit to work through.”

She’d never met a Dahlia in her life, let alone made travel arrangements with one.

Emmy. Her well-intentioned but meddlesome sister knew all kinds of strange and oddly wonderful people. Janie could all too easily picture her sister on the phone plotting ways to pull her out of her post-divorce funk. Shit to work through indeed. “I’m sorry. I’m afraid you’ve got me at a bit of a loss.”

He plunked the suitcase down in front of the luau knock-off reception desk and darted to the computer on the other side. Pointy-fingering the keyboard about as fast as Janie texted on her new iPhone, he wrinkled his nose and squinted at the screen. His voice reminded her of Kramer on Seinfeld. “Most people are at a loss with my Dahlia. People with the gift are a little intimidating at first, but you learn to roll with it after a while.”

“People with the gift?”

“The gift.” He yanked a cabinet door open and a whole panel of old-fashioned keys with lacquered wood key fobs clanked against the surface. “The Sight. Premonitions. Connected to the universe.” He plucked one key off its hook and slammed the door shut. “The kind of mystical intel you don’t ignore.”

Yep, she was gonna kill Emmy.

“Now, I’ve got you in the Dreamweaver suite. It’s one of the best.” He shuffled from behind his desk and handed over the key and a folder full of resort information then pointed toward a hallway at the far side of the lobby. “Head that way ’till you run out of doors. Yours is the last one. Perfect view of the beach. We’ll keep the mini-bar in your room stocked, but better stuff is at the poolside bar. The kitchen is at the center of the complex. Meal times are posted in the info pack in your room, but there are healthy snacks available twenty-four hours a day. All organic and locally grown foods, of course. I’ll bring your suitcase as soon as I wrap up here.”

Well, that didn’t sound too bad. The style of the place might be outdated, but the lobby was clean and cozy. Plenty of sitting areas and potted palms with coral flowers nestled between them for privacy. Maybe she’d skip murdering her sister and settle for good old-fashioned torture. She offered her hand. “Thanks for getting me settled, Mr.…?”

“Oh.” He smacked himself on the forehead and shook her hand. “Silly me. I’m Arlo.”

A hippie professor. Arlo reminded her of Donald Sutherland back in hisAnimal House days, complete with twinkling, pale blue eyes and crooked smile. Happiness fairly rolled off him, buffeting a good chunk of her travel tension.

“It’s nice to meet you, Arlo. Your resort is lovely.” In a retro kind of way. “I’m sure it’ll be everything my sister promised.”

“We always get exactly what we need when we need it. The trick is grabbing onto it when it comes spinning around.”

Hmmm. Definitely friends of Emmy. Same advice, different location. Trouble was, it was hard to glom on to a life preserver when your world was spinning like a cyclone down the drain.

“Now, off you go.” He waved her toward the hallway. “Spend a little time getting familiar with your room and kick your feet up. You need anything at all, just let me know and we’ll get you taken care of.”

After four and a half hours of airports, taxis, and juggling luggage, a little quiet downtime wouldn’t hurt. She could tackle Gypsy Cove and its seventies flashback with a whole new, healthy perspective later. She smiled and waggled a playful goodbye. “I think you give good advice, Arlo. Take your time with the luggage.”

Feet up. Relaxing. Air-conditioning. Maybe after a nap she’d call Emmy and get to the bottom of Arlo and the mysterious Dahlia.

She dropped her room key in her purse, flipped open the resort info packet, and strolled toward the hallway. Food and drinks available twenty-four hours a day. One pool at the center of the resort. One reserved beachfront cabana (palapa) per room, per day. Non-motorized water sports available on request. Beaches, clothing optional.

Janie froze and yanked the amenities flier free of the folder.

No way. No. Freaking. Way. Emmy had lost her damned mind.

Janie closed her eyes and sucked in a deep, calming breath. Nothing to freak out about. She’d just find another, more mainstream place to stay until she could rebook her flight home. Back to what she knew. Back to where it was safe.

And then she’d kill her sister.

She snapped the folder shut, spun around for the front desk, and slammed into a wall of hard, delicious man.